Most of the multi-storey buildings are exposed to direct sunlight during daytime and they need heat control in an efficient way. For this purpose, frosted film and sun control film are applied on the glass windows and sliding glass doors to control excess heat coming inside the hall and bedrooms.

We have done glass privacy films and sun control films for many commercial buildings and very wide range of residential apartments throughout Chennai.

Some homes also need fully blocking out the UV rays and blockout films are used for that purpose. Blockout films are completely black and prevents all the sunlight and heat coming inside. They are mostly used in hospitals and beauty parlors. They are the best heat rejection films if you don’t want to see through the glasses.

Sun Control Film before and after application

They also need privacy as they are built with glass partitions and windows. For reducing heat from the sunlight we use reflective or refractive sun control film and also frosted or etched glass film. For privacy we use frosted films which are available in different colors and textures.

We have luxurious collections of frosted films of brand name CASA.

Check this link for more details for luxury glass films. The UV resistance is 99%. The ultra violet rays are harmful and increases heat and cause fading of curtains and furniture coatings.

These films reduce substantial heat from entering through glass doors and windows. You can feel immediate drop in temperature after applying. Even in hot summer you can feel chillness inside your home.

We have fine quality of sun control films that provide crystal clear views and free from abrasion, peeling or any bubbles.

The frosted film on glass windows provide privacy to your home

These films reduce glare and avoid direct sunrays from entering the room. Wallpapers are used to decorate interior walls with floral images or textures with different colors. Rather than plain painting, many prefer to apply wallpapers to give classy and rich looks to their interiors.

Check our our wallpaper page here

We provide elegant decorative films, glass doors and partitions, Wallpapers for residential and commercial buildings all over Chennai. We do corporate branding in large formats such as printing and fixing on foam boards and wall mountings

To other cities of Tamil Nadu, Karnataka, Kerala, Andhra Pradesh and Telangana, we are providing the materials along with the application tools through couriers. We will also send the video tutorials for the decorative film fixing. We will also send people for fixing to those places for large orders based on requirement. We have provided services near Tambaram, Velachery, OMR, ECR, Medavakkam and many apartments in Perumbakkam. Some of our residential projects in Chennai are

Visit our office at the below location to view the designs we have for our services.

1 . What are the different types of sun control films for glass windows and doors ?

Ans: We are providing reflective and non reflective sun control films for residential and commercial spaces.

2 . What are the properties of reflective and non reflective sun control films for homes ?

Ans: Reflective Sun Control Films are available in Silver and Gold and they have no variations in tint levels. Silver reflective sun control films are light blue (around 50% tint) when viewed from inside and silver on the outside. During night time, silver tint will be on the inside of your room and light blue color on the outside. Gold sun control films are light yellow color on the inside and golden on the outside during daytime and during night time, this will be opposite.

Non reflective sun control films are available in blue, green, brown colors. The tint levels are 50%, 70% and 90% and your can choose the right tint levels based on your visibility requirement and location of your windows and doors. For example, windows facing direct sunlight allows more heat inside the room, so you need to control the heat and light by high level of tint eg. 90% tint

You can check more detailed information by checking this page here.

3 . What is the main difference between frosted film and sun control films ?

4 . What are the types and brands of frosted film available for residences ?

The designed frosted films are of two types

2. Full Frosted – You cannot see through any part of the film, as the film fully covers the glass portions. It is best suited for privacy and have many colored designs for. eg. residential windows and doors in bedrooms and hallways mostly use full frosted films. Full frosted films are mostly colored design patterns.

5 . What type of frosted film is suggested for commercial indoor glasses ?

Ans: Commercial glasses mostly use frosted films for manifestation. Here you mostly don’t need frosting for full doors or glass partitions, either the glass frosting is done halfway or in the middle of the glasses, so that no one will accidentally hit the doors.

Commercial glasses can also be used as space for branding rather than left as plain glasses. You can use the glass portions effectively by printing the glass films or cutting with letters, logos and images. So when the clients enter your office or stores, then the printed or cut films act as branding media on your glasses. You can display your logo, tagline, products or services by printing or cutting on the glass films or frosted films

6. What are the types of commercial outdoor tinting ?

Ans: Commercial outdoor areas have large curtain walls made of toughened glasses arrayed together to give a nice glossy out look. Most of the outer area of commercial buildings with large glass partitions look blue due to blue tint and glass panels of some buildings have green color due to green tint. Some commercial glasses are tinted during the manufacturing process. So they give the sun protection without using sun film.

7. What is the durability of frosted films and sun control films ?

Ans: Frosted films are heat proof, waterproof and dust proof. So they can withstand high amount of heat and water from rain. Frosted films can also be applied on bathroom doors where water contact is more. But still the film remains strong and the adhesive present in the frosted glass films are water resistant. And the frosted film also withstand high levels of heat and it prevent glare from the sun entering the home interiors. So you can watch televisions in the day time without the interruption of external glare. Also when you apply frosted glass films on bedroom or kitchen windows, it prevents the visibility of dust present on the other side of the glass. So the maintenance required is very less as you don’t have to manually clean the other side of the glass doors or windows at regular intervals.

8. What is the difference between 3M frosted film, 3M sun control films and other types of films ?

Garware is Indian brand of sun control films and they have all types of colors and tints and they are manufacturing sun control films for more than 50 years. Garware sun control film is available in over 50 countries of the world, and have sales offices in India, UK, USA and China. Garware brand ensures very high quality and pass through various testing methods before product delivery. It is a trusted brand worldwide next to 3M.

9. Can we remove sun film or frosted film as our own ?

Ans: Sun film can be removed by slowly peeling off the film and after peeling the excess adhesive should be wiped off by thinner or cleaning agent. The adhesive must be completely wiped off before applying the new film. The adhesives will not leave any rough impression on the glass. The glossiness of the glass remain as it is in the beginning.

11. What are the tools required for applying frosted or sun control film ? Can anyone apply these films without the help of experts ?

Ans: You need a water sprayer, baby shampoo, tissue paper or cleaning cloth, squeegee, ruler and a stanley knife. Ruler is used for measuring the glass films to exact size of the film to be applied on the glass. After peeling the backing paper, you need to spray water mixed with baby shampoo for lubrication. You have to spray on the glass as well before placing the film. After placing the film you have to spray on the backside of the film to provide lubricancy while swiping out the water and air bubbles. You have to swipe in T shape first to avoid misalignment of the window glass film. You have to swipe without leaving any space on the surface of the film. If any space is left without swiping, it may cause air bubbles.

12. What are blockout films or blockout glass films ? Where are they used and what are the applications ?

13. What are SRC and Non SRC sun protection films ? 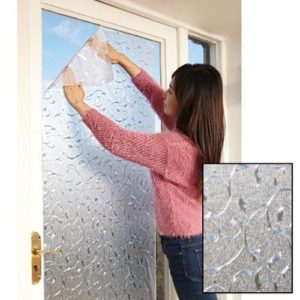